The crux of the evaluation of breast cancer cases is the current prognosis compared to what the prognosis would have been with an earlier diagnosis. That earlier date is usually clear cut. How does one evaluate prognosis?

The classic triad of features in breast cancer prognosis are tumor size, lymph node status and biochemical/genetic features (hormone receptor status, oncogene overexpression). One knows all these features of the cancer at the time of diagnosis and can estimate prognosis using an instrument such as Adjuvant Online (free with registration online; go to http://www.adjuvantonline.com/index.jsp ). Sometimes the prognosis is still good despite an alleged delay, which can alter tne value of the case dramatically despite what in some cases is an obvious missed diagnosis. The challenge is in determining the prognsis of the cancer at the earlier time. Sometimes the mammogram provides the size of the tumor in retrospect. Sometimes all one has is the plaintiff’s recollection of how big the tumor was at the time she complained of a lump. The biochemistry classically does not change with time. The biggest hurdle is in estimating lymph node involvement at the earlier moment. 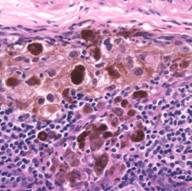 Nest of cancer cells at edge of lymph node

Lymph nodes become involved with cancer from the outside in. Solid tumors enter lymph nodes from the subcortical region first (see picture). By looking at the lymph node under the microscope and observing the pattern of tumor involvement, an experienced pathologist may be able to tell how long the node has had cancer in it.

Once one has determined to the extent possible what the size, lymph node status and biochemistry/genetics would have been at the time of the alleged negligence a comparison of prognoses is then possible. At that point local laws regarding burden of proof beome crucial. In a state like Pennsylvania all one has to show is increased risk of harm. In a cancer case this is usually fairly easy if the delay is long enough and the decrement in outcome is substantial. In states like Florida and Texas one typically has to show that the prognosis went from greater to less than 50% survival.

What if the risk of death exceeds 50% but the plaintiff is still doing well? Again much depends on the law in the particular state. When asked, Dr. Stark has encouraged a structured settlement when the case merits settling, i.e., a settlement figure which reflects increased cost of care, increased suffering from additional treatment; and a second payment if the plaintiff later on develops recurrence of cancer which will cause additional suffering and possible death. For better or worse, despite what he views as this position being fair to all parties and intrinsically reasonable, few attorneys have taken him up on this suggestion.

There are many additional variations on the theme of breast cancer prognosis. Feel free to contact Dr. Stark to discuss.